Now I have not posted in a few weeks. I feel very good. I'm alert all day, but still do not want the left leg as much as your head - yet. It takes a long time to walk. Walking distance has gotten a little better, but I'm still depend only of crutches outdoors.

Now it has been seven weeks since the transplant. I have not experienced any negative side effects that I can connect to the treatment. What I have noticed is a mild cold. However, without fever. I have not been sick for the past 8 years apart from my MS. It has almost been nice to cough and blow my nose. :)

I got a present on my 50th birthday, a culinary trip to San Sebastian in Spain. 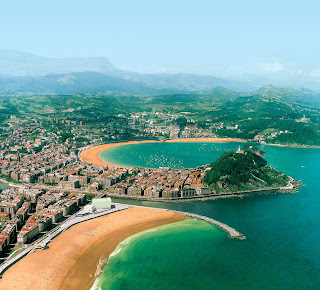 San Sebastian (Basque: Donostia, official name: Donostia-San Sebastian, French: Saint-Sébastien) is the provincial capital of the region of Gipuzkoa and the Basque Country's premier tourist destinations. The city is like most coastal towns marked by fishing and picturesque harbor area, but where fish sheds require low available today upscale seafood restaurants. The city's central areas and promenades goes in Victorian architecture - the city was around the turn of the century a major tourist city for the Spanish royal family and nobility. 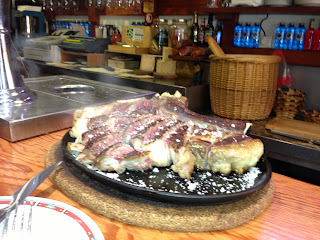 Every year a big festival in town, semana grande, with bullfights, festivals and activities such as concerts, amusement parks and rowing competitions. The city is also known for its international film festival each fall.

One reason that San Sebastian is one of the Basque Country's major tourist destinations are the two large sandy beaches that stretch out on either side of the city center. La Concha (Shell) is the largest of the beaches and counted as one of the world's finest. On the other side, Zurriola, the more youthful beach. It is known for its big waves and good surfing opportunities. The city's youth culture is highly influenced by just surfing.
Donostia-San Sebastián has been named the European Capital of Culture 2016. 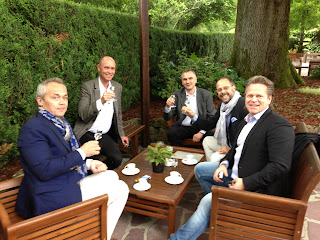 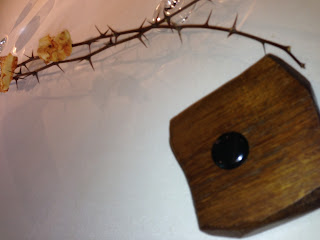 Day two we had lunch at Mugaritz, which has two Michelin stars. It was a 22 course tasting menu with a dozen wines. Damn it, it was good!

For the first few months were really full stomach, and maybe a little drunk ... 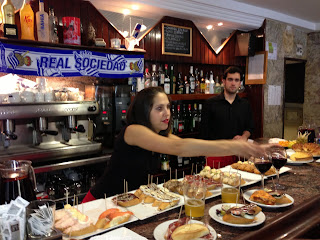 The day did not end there. We had not eaten dinner yet. It was a wobbly walk between the bars of Fermin Kalbeton in Parte Vieja. Pintxos and a glass of wine here and pintxos and a beer there. Finally I was drunk for real. Then my friends supported me to the taxi. Alcohol kill my legs. 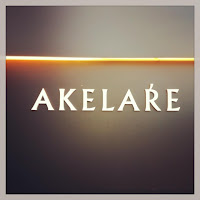 After a good night's sleep, we were on track with our culinary journey again. We had a fairly light lunch and finish with dinner at three star Akelare.

We were still full from yesterday, so we contented ourselves with an eight course menu. Very full and satisfied, we returned late at night to the hotel. 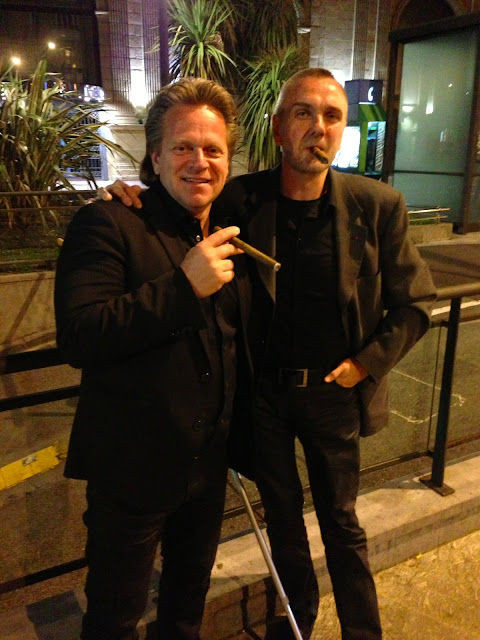 Thanks Kjelle for the experience!

Posted by MS-Patienten at 08:10 No comments:

Sorry,
the agenda has been overbooked the last weeks. I did not have the time to blog. I will come back in the middle of the week and report. 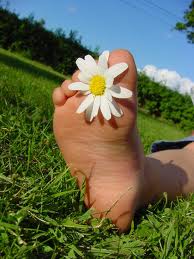 Many of my readers are worried, is something wrong?  It´s not! I feel good and my walking distance is improving.  I am using my feet instead of the keyboard...

... August 2012, Relapse
The last days of my own time, I got a relapse. I had cortisone medicine bag. I sat in the woods and nibbled steroid tablets and felt sorry for myself. I was alone and tried to do everything as best I could. 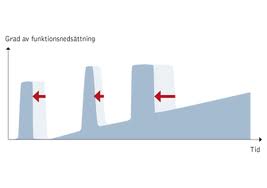 It was not the first relapse, so I was very attentive and tried to stop the relapse directly. Twenty cortisone tablets a day for three days. I think the cortisone made a ​​good work. It did not take more than three weeks before I was al-right again.

Luckily I managed to finish my projects before the relapse and my wife came up to the cottage.
To be continued... 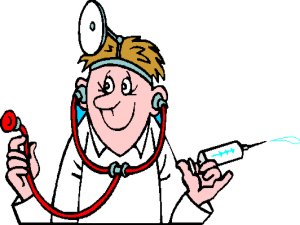 Today it was time for one month check-up after the stem cell transplant. Neither I or my doctor knew if I got the real treatment or placebo. However all tests were good. The scales for memory and cognition has improved 15%.

I can´t guess... Anyhow I feel very good, and my energy is better than the last couple years.

If this placebo, then placebo is good!

Can I have another one of this placebos? Please.

Posted by MS-Patienten at 20:52 No comments:

... August 2012, private land development
My ego had been considerably strengthened by the success with the chopped wood. I had a few days earlier that part of my plot was high on the list to be made ready. The area is approximately 800m2. It is sloping, uneven and full of potholes. It was certainly a decent lawn, but not pleasant to drive the mower on.

I can not dig with a shovel any more, much less rake or run with the wheelbarrow. My legs are not allowing that. I had to struggle to walk 100 yards with crutches or walking sticks. There is always a solution. I had the time, the ideas and the excavator was brought out of the barn. 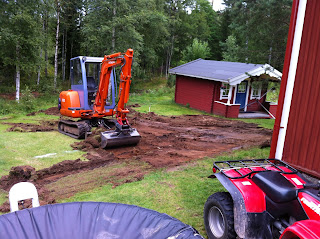 I pulled a few lines at the edges and tried to estimate how much land masses that needed to be moved. There were differences in height of nearly one meter. I estimated average of 50cm. It was about approx 400m3 or 7-800 tons. It's nothing to do with the shovel if you do not have a long holiday and is strong in the back.

I filled up 50 litres of diesel fuel in the hydraulic excavator one morning and jump in to the machine. The first step was to plane away any sod on the lawn and put it in the deepest pits. It becomes 800m2 x 10cm 80m3. Roughly it can fit in 800 overcrowded wheelbarrows. The peat is not as heavy, but the grass is tough. 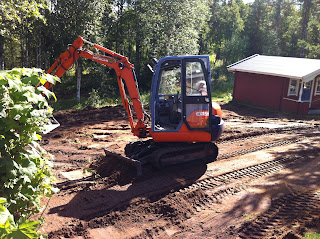 I continued the next day with troubleshooting. The concern felt in the stomach. In a few days my wife would come. If she see the plot in this condition, she would go crazy for real.

I would be in quarantine on my side of the bed in a non foreseeable future. It was not an option. It was just to fix the damn excavator. 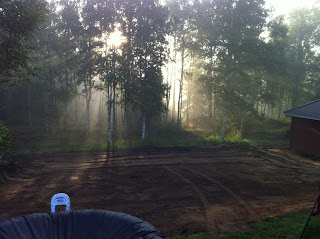 On the internet I found an exploded flow-chart view of the excavator engine. I followed all the system and found a solenoid valve that was broken.

How do I get a solenoid valve to a machine that is more than ten years old? I did not.

I hot-wired instead. The machine started and the work could continue. The bed issue was taken care of.
To be continued...

Today, +30 days after stem cell treatment.
It has been a good day in a row of good days. Nothing special to report.

Posted by MS-Patienten at 10:42 No comments: 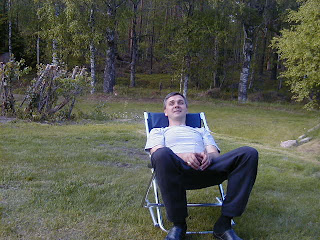 It had been an eventful summer. I felt the need of own time. It would be nice to relax and not have to talk to anyone for a while. Just to indulge myself without haves. Me and my wife agreed that I would be in the country one week on my own. I slept for an hour each afternoon. I needed it for recovery.

The first days I did nothing at all except for sleep and eat. Then came the motivation back again. I went around the fields, fixed small things and planned for new projects.

The first point had been hanging on my shoulder for more than a year. The fire wood was about to run out. There was a problem. I did not dare to start the chain saw and fell some trees. Even less, I had the strength to gather logs and chopping wood. 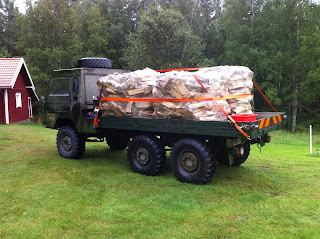 A friend also had bought a machine sawn and chopping wood. He had a large enough production that he started selling ready-carved wood. I took my old military truck and went to him. On my truck he loaded nearly four tons of dry and fine birch sawn into 30-centimeter lengths. The price of the fire woods was the most affordable.

Once back home, it was only one problem. The load should enter the barn for storage, and I almost could not walk. 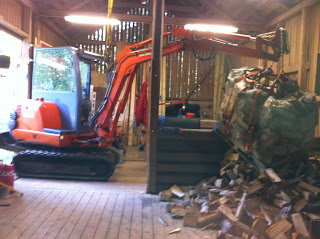 The solution was that I removed the bucket on the excavator and lifted the sacks into in the barn. They weighed nearly a ton each. It was on the border of the excavator strength to lift pallets. Once inside, so I just ripped up the bag when it hung in the air.

The barn was full of dry, fine wood, without I had moved a stick by hand. It is to work with the head in place, instead with the body.
To be continued... 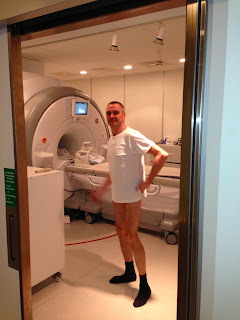 My status is still good, even if I got a mild flu. No fever, just a little sick. Not that bad that I skipped work. The consequence is that my body is not responding so well. I have not been "sick" (except for MS) in more then ten years. Interesting.

In the afternoon it was time for the four week post transplant MRI. When they took me out of the tunnel, I was informed that the T1 session was corrupt. We can´t shoot again because you have got contrast fluid. You need to come back Friday.

Posted by MS-Patienten at 19:48 No comments: 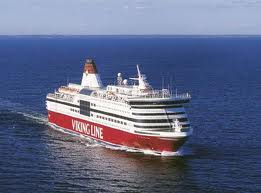 After all, when the fuzz with the fire had subsided, my brother wanted us to have a boat trip to Mariehamn. It's not really my thing to go on senior cruises. But why not, it was a nice summer day, and we could sit out on the sun deck and have a good time. 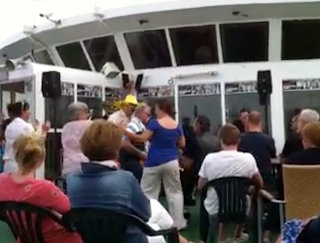 I had some trouble to walk along the long walkway to the ferry. We had plenty of time and I had the crutch with me. We sat in the morning sun and drank a breakfast beer. My brother began to wonder what he would shop at duty-free on the ferry. In Mariehamn, we would swap ferry for the return trip to Stockholm. He continued to talk about tax-free until I got eczema in my ears. I told him that he had to rush down to the store, we are soon in Mariehamn. On the return trip to Stockholm we can´t shop tax-free. 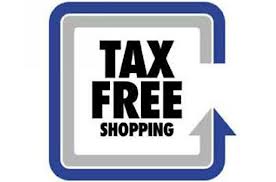 He disappeared into the bowels of the ship, like greased lightning. A moment later he comes back to deck 10 with a cart that has minimal wheel. The cart was overloaded with eight cases of beer.

An hour later, we arrived in Mariehamn. The exit was on deck five. It went all right for him to take his cart down the stairs. Then it was a mile walk to the other ferry. He kept a good face even when sweat beads appeared in his forehead.

I told him that he could drink a few beers if he was thirsty ...

The trip home went well. Of course I made ​​my purchases on the return ferry. Why carry when you do not need to...
To be continued...

Today, +28 days after stem cell treatment.
I had a good day today. There was just one problem. I had to skip lunch. The invoice for that showed quickly. The legs did not listen to my brain. I had to use the crutch in the afternoon.

Except for that, I feel good. Some extra food in the evening will correct my mistake.
Posted by MS-Patienten at 20:11 No comments: