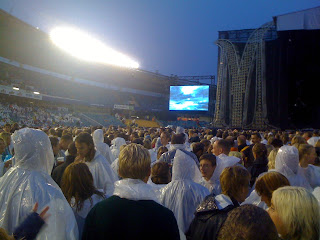 Madonna is an old favourite artist. I have previously been to one of her concerts at Ullevi in Gothenburg. When she was here, once again, it was obvious to go to the concert. Last time we stood on the field in the rain. This time we had space in the gallery, under a roof. It was probably 100 steps to get to our seats. Absolutely not wheelchair friendly. I avoided drinking anything to avoid going down to the toilet. 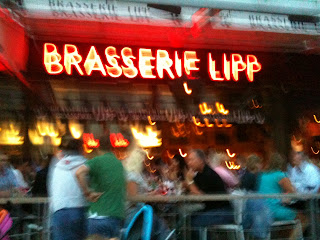 I was terribly disappointed in the concert. She went up on stage nearly three hours after the scheduled time. Poor respect for her audience. I was so pissed that we left the concert at half-time. Besides pissed, I also had to piss. We went down town and drank a glass of wine instead. Much nicer than at Ullevi.

After the disappointment in Gothenburg, we went up to the Värmland. We got a few days there without children. We continued with the renovation of the room in the cottage. I sit on the chair and the supervisor and my wife works.

We went to dinner one day at my brothers place. For some reason, all the mosquitoes on the hunt together. It was a perfect summer mosquitoes last year. Cool, damp and rain every other day. 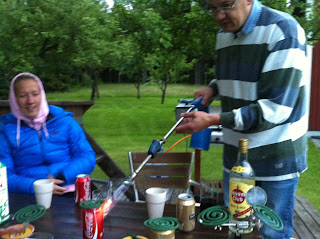 There were so many mosquitoes that it was not enough with tight clothes. We took to each pesticide was. Spray, jungle oil and mosquito coils. To get mosquito coils to burn well, my brother used the gas burner.

I can still smell the smell. The mosquitoes kept their distance and we sat and coughed. Then ask the most people, why did you not go into the house? In Sweden there is no question about it. Here you stay outside in the summer, regardless of the weather or mosquitoes.
To be continued...

Today, +19 days after stem cell treatment.
This morning I woke up all-right spirited. We went back to Stockholm at midday. It is a journey of 350 kilometres. I have on previous trips have become very tired after a few hours of driving. So tired that I had to stop the car and rest for a while.

Today's driving was not a problem. I was not tired. We continued with activities at home and watched a film on TV. I'm was not tired even then.

It might be a good day, but I do not think so. Something good happens!

Email ThisBlogThis!Share to TwitterShare to FacebookShare to Pinterest
Labels: mosquitoes