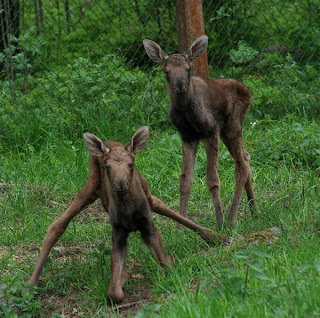 Strengthened by the wolf experience a few days earlier, we decided to go back on the wolf hunting again. I had fuelled up the machine with twenty litres of expensive petrol. We set out into the night. After a few miles we saw a moose in the forest. The elk is not the smartest animal in the world. The calf just stood and looked into the lights without making any effort to go away. Not even when I honk the horn moose moved. When I start driving towards the moose, he turns around. I stepped on the throttle a bit, then he jumps into the woods. 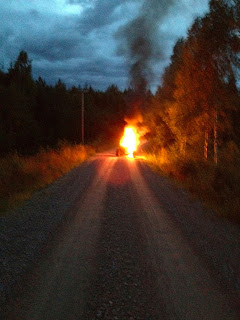 We came up to the lake where we saw the wolves the other night. There was no life there today. This time I stopped and pee there! My wife giggled hysterically and joked about the wolf.
We continued a few kilometres ahead in the night. I got a feeling that something was behind us. It was a mystical glow. I turned my head and saw one meter flames beat up behind the Polaris. I was riding at 50 km/h. The machine made no sign that something was strange. The lights lit, and the engine sounded as usual. 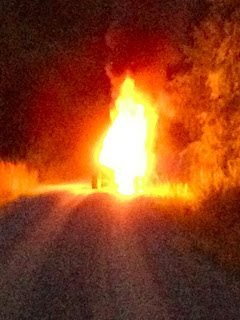 I stopped and yelled at my wife to jump out. By now she had also seen the flames. It did not go so fast for me to get unbuckle and get up out of the sports seat. MS makes me not so fast any more. I felt the heat from the fire in my neck. When I took myself out, the flames were there we sat a few moments earlier was three feet high. 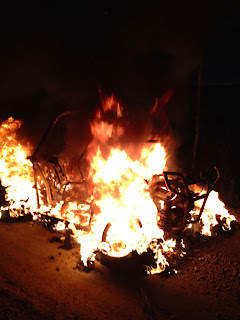 After a few minutes the whole Polaris flash over. There was such a heat that we had to back away 20-30 meters. The flames were 20 feet high when gasoline, aluminium and tires burned. I started to get worried about wildfire. When aluminium burns it becomes a huge shower of sparks. Salvation was that it rained a little earlier in the evening.

In 15 minutes had everything that could burn burned. Even the wheels were gone.

There was just only one problem. How should I get home. I had no crutches with me, and it was eight kilometres to walk home. I know for sure that the wolfs are out there somewhere... The night was really dark.

I could barely see the hand in the dark.
To be continued...

Today, +26 days after stem cell treatment.
I have been at my country house a couple of days. I had big problems with the ISP. I could not get contact with the base station. Therefore no internet and no updates of the blog. Now I am back in Stockholm again. I have just swapped the ISP.  Now I am on-line again. :)

How ever, I have noticed some small changes last week. I did not think there were any problems with the brain capacity of a month ago. I can now say that I am faster in my head now and I do not get mentally tired after a full day. I also notice that the brain is faster than the feet and hands.

It is frustrating when the body does not keep up. I guess I've gotten used to it all has been slower for a long time. Now I only use the crutch longer distances. Sometimes it can be nice to have someone to support in.

I can keep going all day without taking a nap. I notice in particular that I'm more alert in the evening.

Later this week I will do the MRI and meet the research physician. I feel very good, and can not say if I got a sharp transplant or if there is a combination of other factors.